THE ARTIST
Ammar Abu Bakr is a visual artist and a former teacher at the Fine Arts School of Louxor in Egypt. He also contributed to the famous mural painting in Mohamed Mahmoud street. In 2011, he began with other graffiti artists to create stencils and mural paintings as a protest against the police and in favour of the uprising. He took photo portraits of twelve people among the dozens who lost an eye in the battles and used the colours of the national flag in the background. In February 2012, along with artists such as Alaa Awad et Mohamed Khaled, he drew a great painting on the wall of the American University of Cairo in the Mohamed Mahmoud street representing the martyrs of the football team el Ahly who were killed in the Port Said Stadium confrontations. Ammar Abo Bakr found their portraits on Facebook and showed them with angel wings or framed them with a black stripe as a mark of grief. He says that these wings are the ones of the Coptic saints that we can see in churches, thus showing that the Egyptian heritage is at the same time Coptic, Pharaonic and Islamic.

BACKGROUND
While phone lines and Internet connexions were cut for the population, the art of graffiti spread in Egypt during the Arab Spring, although it existed before. If graffiti artists contributed to “inform” the revolution and the political events happening in the country, their tags also symbolised a form of artivism. In fact, within a few months graffiti artists have become influential activists, displaying satire, catch-phrases, powerful visuals to express their rejection of the government.

EXPLANATION OF THE PIECE
In March 2012 Ammar Abo Bakr launched the collective graffiti campaign “No Walls”, in protest against the walls set up by the army in the middle of Cairo. These seven walls blocked access to the ministry of Interior after football supporters of the el Ahly football team died in the confrontations with the police in Port Said.
Thus, on these walls artists drew and painted rainbows, kids playing, trees, smiles… They did it in trompe-l’oeil style, extending the street perspective and giving the illusion that the street is not blocked anymore. They wish to free the district and the inhabitants from the walls imposed by the army. One of the most well-known paintings is the trompe-l’oeil of the Sheikh Rihan street –– meticulously replicating the perspective of the street and the details architecture of the American University of Cairo. 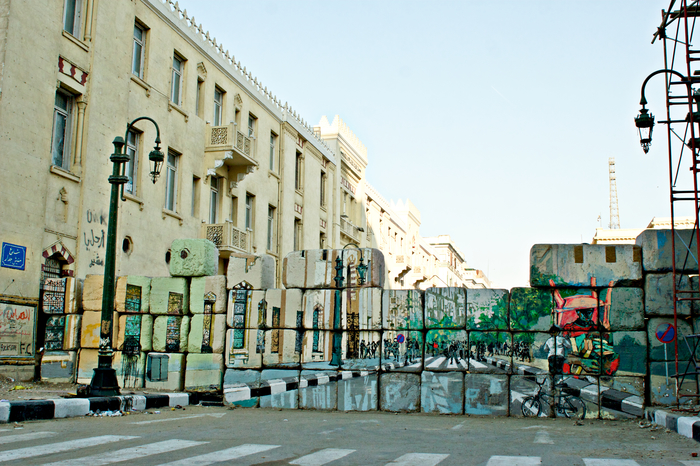