THE ARTIST
Tino Sehgal is a British and German artist born in 1976. The performance, the dance and more particularly, the choreographic part plays an important role in his work. However, the artist does not define himself as a “performer”, but as a “situation designer”. Tino Sehgal strives to challenge the limits of what makes the definition of a work of art by involving directly the public in his pieces. We can also see in them that he disapproves of the market value of art and the artist protects his private life: he cares to never leave a trace. He does not sell tickets to his exhibitions nor send invitations, he does not organise openings, he refuses to give interviews, his name is not written on any billboards… He also refuses that people film or take pictures during his exhibitions.

EXPLANATION OF THE PIECE
The visitor enters an empty room with white walls. He is welcomed by a teenager who asks him “What is progress?”. The visitor is invited to talk with the teenager while they show them the way to a second room. Here an adult is waiting for them. The teenager summarises their conversation and leaves the visitor. The adult then takes over from the teenager and continues the conversation with the visitor, while leading them into a third room where a senior is waiting for them. The adult summarises the situation to the senior and leaves the room. The senior tells a private anecdote to the visitor and walks him to the exit.

EXPLANATION OF THE PIECE
Throughout his works, Tino Sehgal raises questions about another possible economy for the art world. Indeed, his works are temporary and, thus, fall outside the scope of the art market economy. Nor a trace is left after the performances: no photographs, no videos, no posters, no tickets… Beside the trace left in our memory. His performances, thus, puts in value people meeting together, interactions, the power of speech as opposed to the art market. Perhaps that is what progress means according to the artist? Beside making encounters happen, Tino Sehgal’s works give them food for political, economic and social thinking about our contemporary societies.
Therefore, in the situations Tino Sehgal designs the visitor is not a passive one anymore, simply visiting an exhibition, but living a fully-fledged experience. 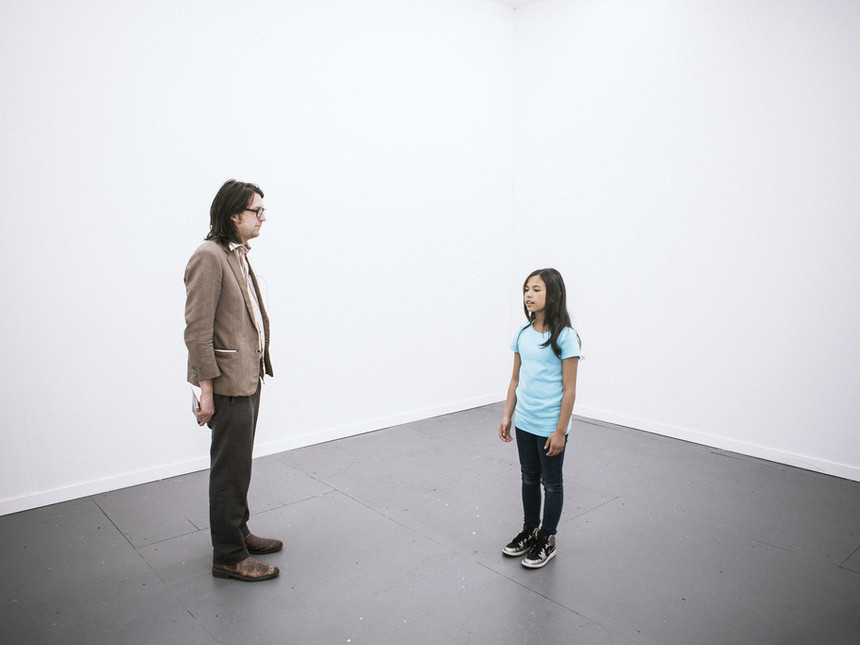