THE PIECE OF ART
title : scratching the surface| artist : vhils | date : from 2007 on | Place : Mainly portugal, but has walls also in germany, London, romania, etc.

THE ARTIST
Portuguese artist Alexandre Farto (1987) has been interacting visually with the urban environment under the name of Vhils since his days as a prolific graffiti writer in the early 2000s.

BACKGROUND
Vhils grew up in Seixal, an industrialised suburb across the river from Lisbon, the capital of Portugal, and was deeply influenced by the transformations brought on by the intensive urban development the country underwent in the 1980s and 1990s. He was particularly inspired by the way city walls absorb the social and historical changes that take place around them. Applying his original methods of creative destruction, Vhils digs into the surface layers of our material culture like a contemporary urban archaeologist, exposing what lies beyond the superficiality of things, restoring meaning and beauty to the discarded dimensions buried beneath.

EXPLANATION OF THE PIECE
Mainly, Vhils portraits anonymous people in the streets of different cities. ‘The a face is what turns all my work into one. But also because a face represents a reflexion – the city is my canvas but a face, an anonymous face, represents identity, the individuality of a space in a city. My thoughts, besides being on the city, are mainly about the effect that the city has on people, on their identity, on the way we connect with each other’s and with the city. On the way we see these layers, that we see everyday and that we gather every day, affect our experiences, our dreams, our expectations, lifestyle and life conditions. 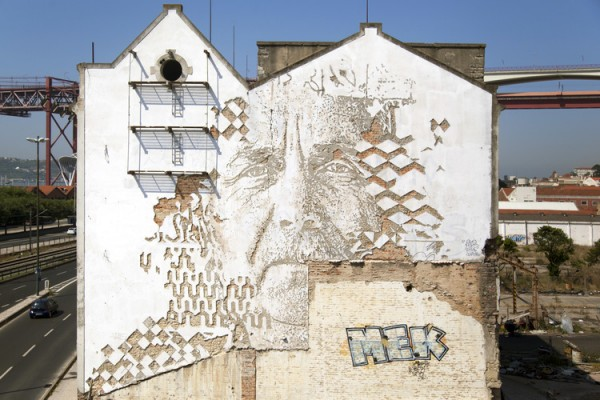