THE ARTIST COLLECTIVE
The Yes Men (Jacques Servin & Igor Vamos) form an American artist and activist duo, that was born in 1993. The artists fight against capitalism, in particular against the privatisation of the public space and the relocation of firms. They also give performances against G. W. Bush and the Iraq war. The artists criticises neo-liberalism by using its own codes and make a mockery of them: hoaxes and caricatures are their favourite weapons.
BACKGROUND
In 1995, the WTO (World Trade Organisation) established international agreements enabling multinational companies to dissociate totally the place of goods production from their point-of-sale. Multinational firms can, therefore, delocalise their businesses in countries where social taxes and labour cost will be undeniably lower. In doing so, they have the guarantee to generate certain and immediate profits.

DESCRIPTION OF THE PIECE
The performance took place during an international conference in Tampere, the second biggest city of Finland, about the future of the textile industry and new technologies. During the conference, the two artists stepped in and pretended to be two representatives for the WTO: Mr Hank Hardy Hunruh and his assistant. Mr Unruh begins his intervention with a comparison supported by statistics about the cost of a slave and a worker from developing countries. “The WTO is against slavery. Indeed, if we add up the expenses for food, clothing and accommodation required for a slave, the sum of their expenses is obviously higher than the cost needed for an Asian child hired by a firm like Nike. That is the reason why the American Civil War turned out to be a waste of money for the United States, as slavery, that is unprofitable, would have disappeared anyway”. No reaction in the conference hall. Hank Hardy Unruh carried on with some compliments about Gandhi:

“This idiot had harmful protectionist reflexes”.
As he noticed no reaction in the audience, he then showed a golden prop in the shape of a phallus that stood as a symbol of a tool to control and subdue the employee.

EXPLANATION OF THE PIECE
This performance mocks multinational firms with a satirical discourse on the privatisation of the market and the apology of domestic slavery. The Yes Men use their favourite weapons: their sense of humour, pastiche and grotesqueness to denounce and debunk liberalism. 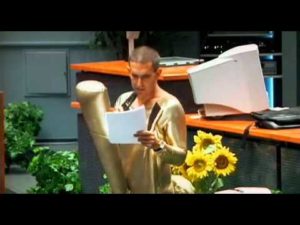