THE ARTIST
American Fred Radtke, known as the Gray Ghost, is a fifty-one-year-old activist who has turned the fight against graffiti into a personal mission. On his own initiative, without permission and paying for his own materials, Radtke patrols the streets covering all kinds of inscriptions with his characteristic rectangles of gray paint, which have made him, paradoxically, the most active urban artist in his city

BACKGROUND
Radtke’s patches are not limited to attacking graffiti. They also cover more friendly and accepted pieces of urban art, such as the small paintings on canvas that the artist Nola Rising nails trees and streetlights of the city. Advertising is also a target of Gray Ghost, but only illegal, especially the small plastic posters advertising local businesses, common in the suburban gutters of the United States. The humble street paper poster, the traditional tool of communication of music and underground culture, is another form of illegal advertising victim of its attacks. Radtke does not start the posters, but he paints them in gray
The Gray Ghost himself became the subject of some of Banksy’s New Orleans work, depicted as a bent figure blotting out color on the city’s walls.An example of artivism about artivism, where Banksy painted over huge swaths of Radtke’s gray paint, Radtke came back and painted over many of Banksy’s works of art (captured on video in one case) – without the permission of the property owners. 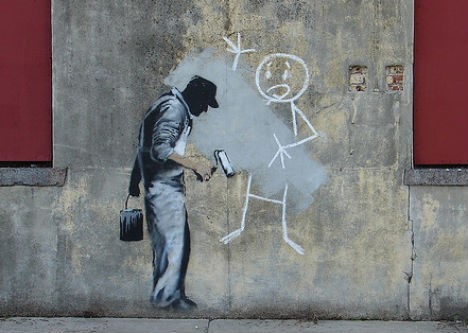 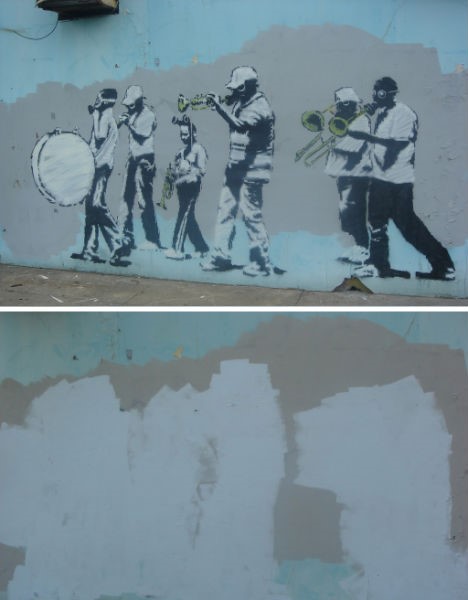 Intervention on a Bansky’s painting.