THE ARTIST
Zanele Muholi is a South African artist and photographer born in 1972 in Umlazi, Durban. She is an active member involved in the LGBT cause. She works as an activist on the condition and identity of lesbians in her country.

BACKGROUND
Since the end of Apartheid, gay and lesbian human rights in South Africa are enshrined in the Constitution and the law. Gay marriage has become legal in 2006: South Africa, thus, became the fifth country in the world and the first in the African continent to legalise gay marriage. Nevertheless, discriminations and crimes against lesbians still remain widespread. Nowadays, members of the LGBT community want to show that their sexual identity is not conflicting with their African identity.

EXPLANATION OF THE PIECE
Consisting in a series of photographs in black and white, Faces & Phases has started in 2006. It compounds more than two hundred portraits of Black-African women, lesbians and transgender people. The project is entitled to protect, preserve and expose their visual stories: it gives them visibility and suggests positive and gratifying representations of the community in the media and exhibitions places. But this work is also meant to be a protest call against violences that Black-African lesbians and queers suffer: the artist photographs many people who underwent homophobic attacks. 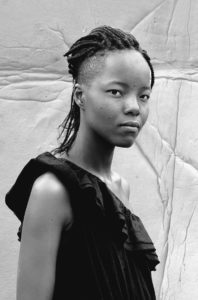 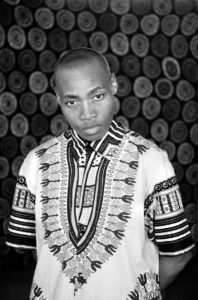