DO WOMEN HAVE TO BE NAKED TO GET INTO THE MET. MUSEUM? | GUERILLA GIRLS

THE ARTIST
Guerilla Girls is a collective of women, based in New York, USA, who produce visual campaigns, provides workshops, their main topic is the exclusion and discrimination of women in the art world. The anonymous women artists always wear masks of gorillas and have names of famous former female artists.

BACKGROUND
Exclusion of women artists from the prestigious institutions and the art world.
“(…) That work is more than a quarter-century old, but the Guerrilla Girls have updated it over the years – with the results just as discouraging. The 2011 version states that women represent 4 percent of the artists in the modern-art sections of the Metropolitan Museum of Art but 76 percent of the nudes.” (guerrillagirls.com)

EXPLANATION OF THE PIECE
The group began in 1984 as a response to The Museum of Modern Art’s exhibit An International Survery of Painting and Sculpture where 100% of the artists exhibited were white and less than 8% were women. The members of guerilla girls are calling attention and challenge the hegemony of the art world, they also fight against racial and political discrimination. They use posters, street art, videos and other easy and accessible channels to transmit their mostly ironic messages, organize street actions, protests and forums, edit books. 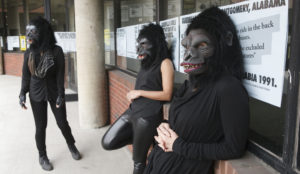 Guide how to behave (manifesto kind of video)

(sources of the videos and photos too: guerillagirls.com)