THE ARTIST
Piotr Pavlenski is a Russian performer artist and a political activist born on 8th March 1984 in Leningrad. His work explicitly denounces the Russian government. Among his actions, he stitched his mouth during the Pussy Riot trial, nailed down his testicles on the pavement of the Red Square, cut a piece of his ear in front of the Serbsky centre. The artist uses his body to defy Russian authorities and condemn censorship, the arbitrary and authoritarian regime of Vladimir Poutine.
“FIRST OF ALL, I WANT TO SHOW TO EVERYBODY THAT ACTIVISM IS EASY AND POSSIBLE. YOUR RAW MATERIALS MIGHT AS WELL BE YOUR DOMESTIC APPLIANCES THAN YOUR OWN BODY; YOU NEED NO MONEY TO CARRY OUT AN ACTIVIST ACTION. YOU JUST NEED A BIT OF MOTIVATION AND WILL TO GET OVER FEARS IMPOSED BY THOSE IN POWER. THEN, ACTIONS MAKE PEOPLE REACT AND CRITICISE. CALL IT A SOCIAL REFLEX, IF YOU WANT. THESE ACTIONS QUESTION WHAT IS HAPPENING AND GIVE AN ACCOUNT OF THE POWERFUL PROPAGANDA ESTABLISHED BY THE TOTALITARIAN IDEOLOGIES”.

BACKGROUND
This performance took place in response to a series of laws aiming to stop civic activism, more and more frequent intimidations towards the population, the rising number of political prisoners, anti-NGO laws, laws in favour of censorship, laws against “homosexual propaganda” and “anti-blasphemy” laws in Russia.

EXPLANATION OF THE PIECE
On 3rd May 2013, Piotr Pavlenski accomplished a performance to protest against the political repression that is led by the Russian government. His assistants carried him naked wound around barbed wire and put him in front of the main entrance of the Legislative Assembly of Saint Petersburg. The artist remained silent. In his barbed cocoon, the artist did not say a word to the remarks of the people watching at him until he had been set free by the police.

This performance occurred against a series of repressive laws that did not target criminals but individual liberties. The human body is naked, like a carcass dressed in barbed wire, that same wire that was made up to protect a cattle. The artist wishes to make people aware that these laws are just like this wire: they imprison people in a toxic nest, depriving them of their human rights and liberties. 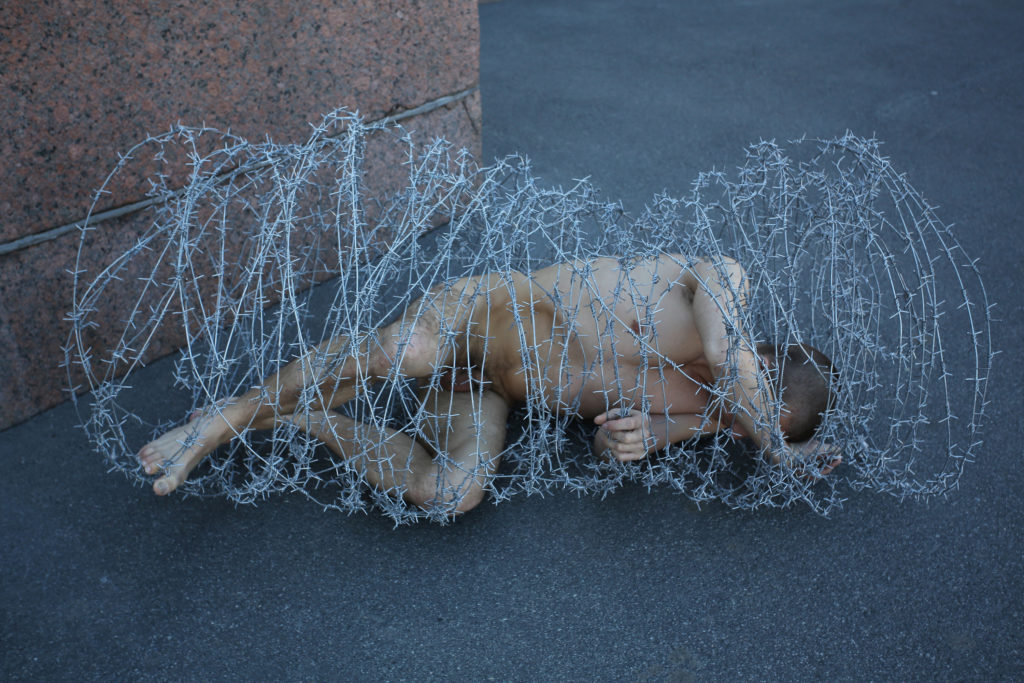