THE ARTIST
An anonymous painter and urban artist which produces trompe l’oeil, papier maché paintings, murals and graffiti with political and activist messages.

CONTEXT
Since the beginning of the Greek financial crisisin 2008, Bleeps has been creating a series of works related to the crisis’ impact on ordinary people and the lower middle class, globally and in his country. His/Her work has been widely studied by artivism experts, such as Myrto Tsilimpounidi and  Walsh Aylwyn.
Some ideas of the artist concern the need of fighting the virtualization of reality and its gradual de-identification.. The artistic tool becomes extension of the physical limb, but not only. It substitutes the confrontation of reality, introducing a “swipe type” of a pseudo-real. The idea is shocking and questioning the static passivity of urban life.

Motto: Street Art is a Social Diary in Public Display 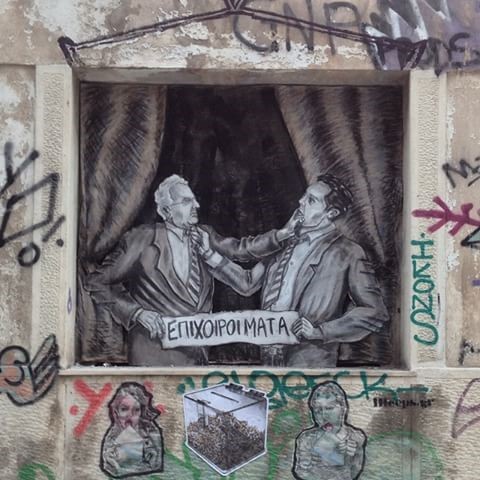